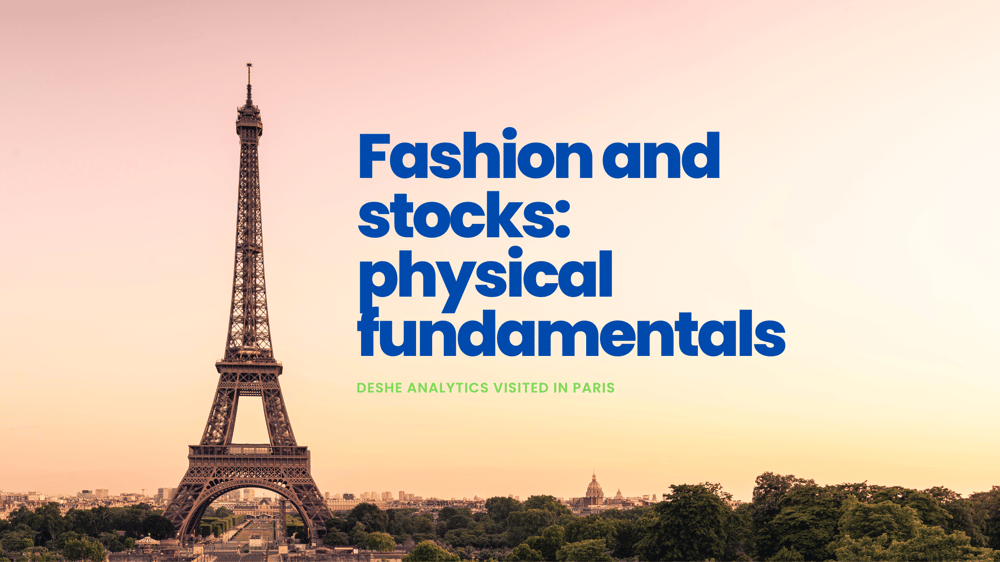 Visiting Paris is a dream destination for many non-Parisians. It’s known for  Eiffel Tower, walking along the Seine River, seeing French paintings close up and the many famous French fashion houses (I’m most interested in the haute couture luxury brands). As a marketing manager for Deshe Analytics, I wonder less about whether I invest in classic Louis Vuitton shoes, an Hermès bag or a Birkin Bag (some models costs up to USD$400,000), as the classic Sex and the City scene said: "It's not a bag, it's Birkin". Now, I focus on which company’s stock is a better buy.

As with all investments (fashion and financial) I search for quality. This generally starts with fundamental analysis. This shouldn’t be difficult, but there are so many options now, it’s nearly impossible for one person to know everything about everything. AI-based research makes this process much easier and faster because the software does most of the heavy lifting for us...

From a fundamentals perspective, LVHM, which published it’s latest quarterly financial statement on July 26th, received a Neutral/Hold ranking from Deshe’s AI. Moreover, looking at the standard TA indicators, the stock doesn't look to be set up for a positive movement, receiving a Bearing ranking.

I might be better off with another luxury brand at this time.

They similarly reported mediocre results that Deshe’AI forecasts to not make it a top-performing stock in the upcoming quarter. From a TA perspective as well, the stock received a British ranking on nearly all the key parameters.

So do  European luxury brands look better? Doing a quick Deshe search in the Textiles, Apparel & Luxury Goods industry we found that many of the best brand names received similar ratings:

Does this mean that investing in luxury stocks right now is a bit of a risk? Yes. Fears of recession, inflation, and continued supply chain issues seem to be weighing down on the sector, coupled with the actual performance of these individual stocks. For now, I will continue to keep an eye out for deals, even though I am not sure that the worst is yet behind us.

As you’ve may have noticed already, online trading jumped during the pandemic, as it rode the...
Continue

Protect your portfolio from US dollar's strength

The US dollar leaves its imprint in every corner of the global economy: from countries’...
Continue